If you have read Welcome Company for a while, you may have picked up here or there that my husband is in the military; the Air Force to be exact. The Arizona Air National Guard to be exact – exact.

He is privileged and honored to serve with the 161st Air Refueling Wing. He has 28 years of dedicated service under his belt as a KC-135 pilot and now commander. He wouldn’t want me to tell you all of that, which is just one of the many reasons we love him and are so proud of him. He is very proud of the 161st though so if we keep the focus on them, it should be okay. It is Veteran’s Day after all.

But first, I just have to show you this picture from a few years back because I love it so much … 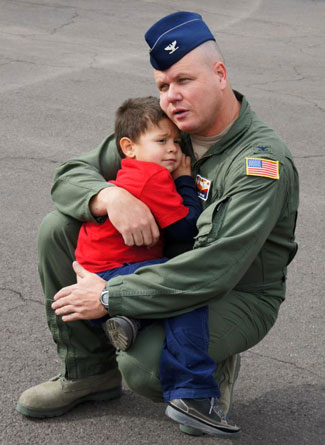 Did I mention, he is also a really great dad?

This past summer, my boy’s and I were privileged to attend a very special dedication. The dedication of “The Spirit of Arizona”. Sara was spending time with Grandma in Washington over Summer break so she missed it. I mean, it isn’t every day that you get to stand on the flight line so close to the runway! 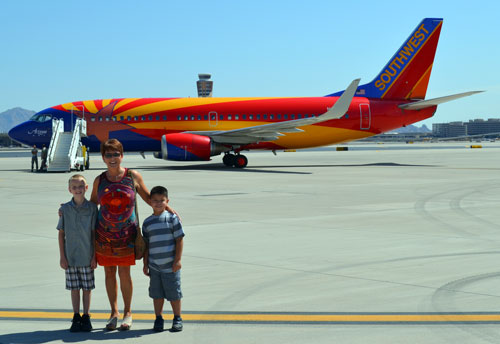 There the boys are with Mizz Courtie (as Nathan calls her – it’s really Courtney).

Mizz Courtie is the wife of Colonel Joe Wilson. Joe is the maintenance group commander who led the team responsible for getting the job done and making the “Spirit of Arizona” happen.

The “Spirit of Arizona” is the designation of the 161st tanker that now proudly displays the Arizona State Flag on it’s tail. From what I understand, accomplishing this was no easy task and a great deal of effort was put into getting the final go-ahead for painting the tail.

Countless “man”-hours went into the job. Many of the men and women who worked on the tail, did so on their own “off-duty” time. Not because they had to; they did it because they wanted to and because they have pride in what they do, in their state and in their unit. 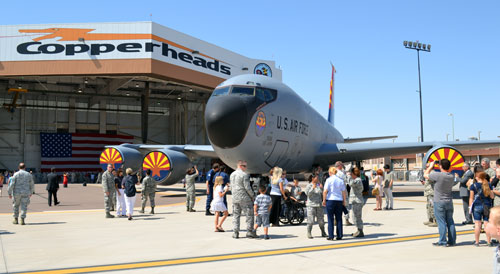 The Copperhead team is pretty special. The maintainers who worked on the Spirit of Arizona did and amazing job. But they didn’t stop with the tail.

They also did this … 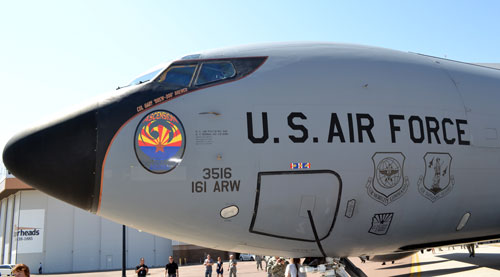 They painted my husband’s name on the bird he loves so much.

I’m sitting here months later writing about it and I am still tearing up. He didn’t know they were going to do it and he was a little overwhelmed and deeply humbled by the gesture.

And on the other side …

Colonel Wilson’s name. His name up there on that aircraft is a big deal. Why?

Colonel Wilson is not a flyer, he is a Maintenance Officer and one of the very best! Behind his name is the name of every single maintainer who keeps these ancient birds in the air. Men and women who’s dedication to their field not only gets the mission done but keeps air crew safe. His name, a maintainer’s name, up there on that plane is a shout out to each and every one of them!

We are always happy when we get a chance to go out and visit with our 161st family. This day in particular was very exciting!

The only thing I can say about his picture is what my husband says just about every time a plane flies over – “planes are cool”. 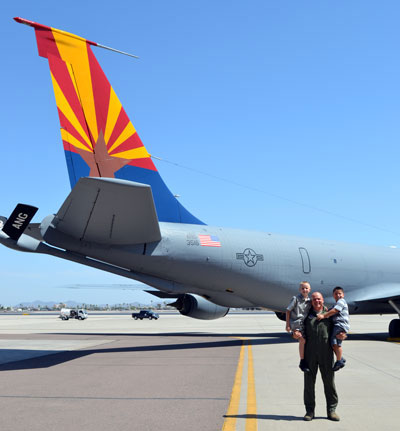 Happy Veteran’s Day Copperheads! You are absolutely the best of the best!

And Happy Veteran’s Day to all who have answered the call.

We love you Sonny.

The Spirit of Arizona is but a symbol of the Spirit of the United States Military and all who serve. So, if you find yourself flying into Phoenix and you just happen to look out your window and see her sitting on the ramp, take a moment to reflect on what she represents.

Veteran’s Day is always a time of reflection in our home. We are a military family and the sacrifice for freedom is something we understand on a personal level.

My husband is an Air Force officer, commander and pilot. He has been “Air Force” since he first walked through the doors of the Air Force Academy 27 years ago in 1985. He has deployed countless times, flying the KC-135 Strato-Tanker in refueling missions all over the globe. He has always come home to me and that blessing is not lost on me. It is why every year, my heart is with those who have suffered such loss in sacrifice for our freedom and the freedom of those who can not fight for themselves.

My father-in-law, Gary Sr. is a decorated war hero who served three tours in Vietnam. He was gravely wounded and has spent his life overcoming the physical and emotional scars that his sacrifice left. But he is still with us. My kids have the privilege of knowing and loving their grandpa. That blessing is not lost on me either. It is why every year, my heart is with those who have come home broken in body, mind and spirit and why it is also with those who love them and are helping them fight their way “back”.

Today, though, my heart is also with Sonny, as it has been the last three years.

Sonny was my husband’s best friend in high school. He wasn’t a very big guy but he had huge personality and an even bigger heart. Larger than life. Sonny was a person so full of life that you couldn’t help but laugh whenever he was around. His real name was William but everyone called him “Sonny”, it was truly a fitting nickname. That is what I remember about Sonny – that and the Hawaiian Mess Dress shirt he wore under his uniform jacket at my wedding. That was so Sonny.

I also remember the day my husband told me he was gone.

Sonny had just retired the previous April after 25 years of service as a helicopter pilot flying Black Hawks, Cobras and Kiowas in the US Army. After retirement he returned to the Middle East to fly Kiowas for a private security company. It was a Kiowa he was flying that Friday morning.

Sonny by the “Little Bird” he loved so much.

Here is something else I want you to know about Sonny. All of the hours of flying gun ships, all of the dangerous missions, all of the years of service and I know without a doubt, one of the things he was most proud of was making a difference for the kids in war-torn Iraq. Sonny was part of a group of Kiowa helicopter pilots who started “Operation Soccer Ball”. These pilots took notice of the kids that would pick up rocks and hurl them at the helicopters whenever they flew over. Kids who were living through war, afraid, traumatized and angry. Kids very much in need of a little hope.

So, Sonny and a number of other pilots decided to start dropping soccer balls from their helicopters. Sonny told the story of one boy who was poised and ready to throw a rock at his chopper, a boy filled with hatred at all he thought that chopper stood for. When a soccer ball fell from the chopper, the boy dropped the rock, stood confused as he processed the moment and then grabbed the soccer ball and gave them the thumbs up and waved. It seems like such a small thing, a soccer ball, but that boy’s life was made better, perhaps even changed, for the brief moment Sonny was in it.

May God Bless America and the men and women who have fought and died in her defense. May He be with those who continue to answer her call and with their families who sacrifice so much.

My Most Recent Posts

Reflections of a Foodie

My great Wordpress blog
When the Kids Go to Bed

we find laughter in the chaos

cancer in my thirties

I was a mom to twin kindergartners and had just turned 34 when a breast CANCER diagnosis completely changed my life...

And all the yummy things we are making…

Baked with Love Inside

"Creativity is contagious. Pass it on." -Albert Einstein

All things fashion and design by Gila ati Amour

The Happy Heart
Musings of an Aspie

one woman's thoughts about life on the spectrum